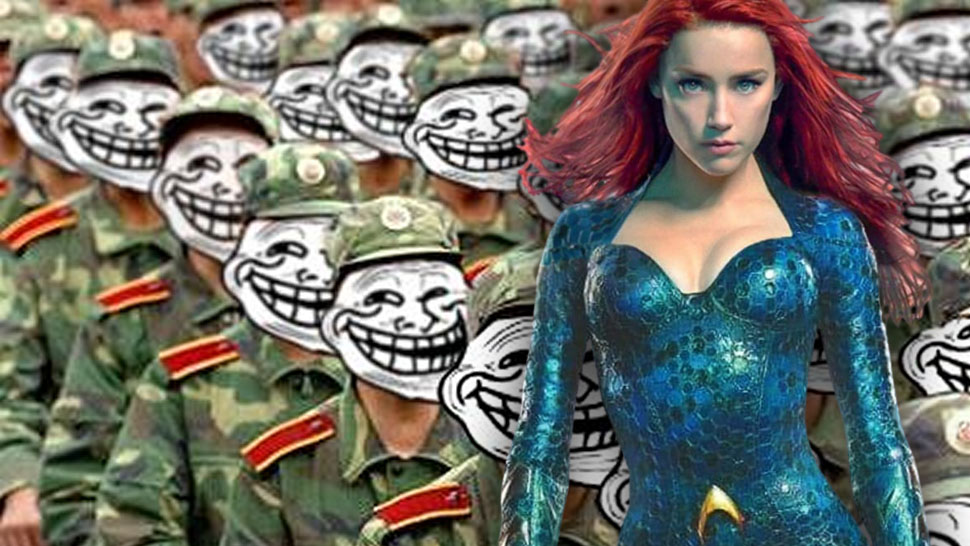 Are You A DC Fan Convinced The Mera Actress Abused Johnny Depp? You've Been Trolled!

It appears as if the media has begun sniffing out a story I’ve been suggesting for well over a year – that Johnny Depp’s attorney, Adam Waldman, has employed bots to influence the opinions of people on social media against actress Amber Heard. If you’re thinking this technique sounds familiar, that’s because Donald Trump employed bots created in Russia to perform a similar function in 2016. A Time Magazine report revealed Twitter bots may have boosted Donald Trump’s votes by 3.23%. Adam Waldman was, at one time, Russian oligarch Oleg Deripaska’s agent.

Just as Trump voters ridiculed the accusation of Russian bot interference, and still wrote it off as fake news long after it was proven, Johnny Depp fans and Waldman are also denying the charge this morning.

According to a report from the well-respected Times of London, NY Law Firm Kaplan Hecker & Fink employed Bot Sentinel, a group that uses artificial intelligence to detect and track troll bots & suspect Twitter accounts, to assess anti-Amber Heard tweets and to investigate if the actress “had been a victim of an ongoing targeted harassment and smear campaign”.

The concluding report claims to have identified active inauthentic accounts created specifically to target the Twitter account of Ms Heard and to push traffic to two anti-Amber Heard change.org petitions asking she be fired from two high profile projects. The report says “we noted the suspicious timing and strange activity associated with the petitions, and… investigate[d] further.”

“While monitoring the Remove Amber Heard from Aquaman 2 petition, we observed a significant number of fraudulent signatures, and we estimate 1 out of every 3 signatures were conspicuously fake or highly suspicious.”

The report concludes the tweets are being automated and implies associates of Mr. Depp could have instructed bot specialists to do the job. And in another total Trump-like move, the report also says the “accounts that were targeting Ms Heard were also promoting and Praising Adam Waldman… it was unusual that inauthentic accounts were tweeting about Mr. Waldman and using similar talking points.”

Of course, the Waldman/Depp case and the Trump campaign aren’t the first times we’ve seen troll bots employed to influence public perception. Automated tweeting played a potentially decisive role in the 2016 Brexit vote, according to the National Bureau of Economic Research. Their calculations suggest bots added 1.76 percentage point to the pro-“leave” vote share as Britain weighed whether to remain in the European Union.

“Our results suggest that, given narrow margins of victories in each vote, bots’ effect [were] possibly large enough to affect the outcomes,” according to authors Yuriy Gorodnichenko from the University of California at Berkeley and Tho Pham and Oleksandr Talavera from Swansea University in the U.K.

That research came as members of the U.S. intelligence community testified that Russian hackers tried to sway the 2016 presidential election in Trump’s favor in part by deploying Twitter bots, which are programs that control a Twitter account. The president denies that he or members of his team colluded with the hackers.

In the realm of entertainment, we’ve seen review aggregate sites like Rotten Tomatoes and IMDB either close their user review sections for media that hasn’t been released yet and force users to authenticate their credentials before being allowed to leave a review for any film or TV show. This is because bots swarmed the sites and left negative reviews of media with strong female leads and political overtones in an attempt to sway the public’s opinion and ultimately sink their success. Targets included Captain Marvel, HBO’s Watchmen, the CW’s Batwoman, and several films in the Star Wars series.

Amber Heard, Johnny Depp and The Cyrillic Russian Spiders From Mars
The Blue / Red State Divide Has Come to the US Box Office
Comment