In part one of our look at comic book characters and their apparent positions on political issues, we examine Golden Age Superman's position on gun control. 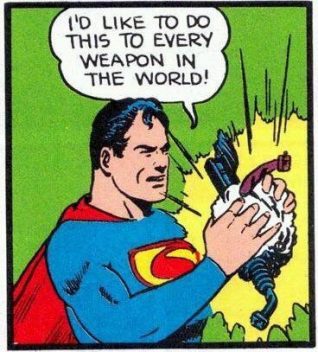 Most comic book fans know Jerry Seigel and Joe Shuster were geeky teenagers when they dreamed up the hero known as Superman. What they may not know is the story behind the Man of Steel’s ability to repel bullets, a reflection of Siegel’s feelings on gun use.

On the night of June 2, 1932, Jerry Siegel’s Jewish immigrant father Mitchell died during a night-time robbery at his Cleveland second hand clothes store. The 60-year-old fell to the ground during the holdup. Gunshots were heard according to the police report, though there’s still some ambiguity whether the elder Siegel died from a gunshot wound or a heart attack induced by his fear of the gun-wielding bandit.

Superman‘s first appearance was six years later, but the character was actually created mere weeks after Jerry Siegel’s father was killed. In one of the oldest surviving sketches, Superman rushes to the rescue of a man being held up by a masked gunman. And Superman’s tepid relationship with guns have bled into the pages of his comic book and movie adventures ever since.

In Superman #6 from September 1940, 14 years before the Comics Code Authority tamped down on gun use and decades before gun control became a hot-button political issue, Superman grabs multiple guns from the hands of a gang of thugs and crushes them together into a ball of scrap metal. “I’d like to do this to every weapon in the world!” he states.

This theme is revisited often during the Man of Steel’s golden age career and forward. Most notably in his first theatrical appearance, 1951’s Superman and the Mole-Men. When facing down an armed mob, a shot is fired, almost hitting Lois Lane. Superman states, “obviously none of you can be trusted with guns, so I’m taking them away from you.”

In 1978’s Superman: The Movie, Clark Kent tells a gunman trying to mug Lois Lane and him that he can’t solve society’s problems with a gun.

More recently, in 2003 – 2004’s Superman: Birthright, the Man of Steel intervenes in a school shooting and puts the people responsible out of action. Afterward, he goes after the man responsible for selling the shooters the guns.

“One minute ago, I saw a little girl screaming because she was staring down the barrel of a gun. She was nine, and she will remember it for the rest of her life,” he says. Superman then shoots a gun point blank in his face. And catches the bullet before it hits.

I can almost hear the voice of George Reeves saying it.

HBO’s Watchmen Strikes at The White Supremacist Movement
What Does Stargirl’s Potential Move From DC Streaming to the CW Mean?
Comment