Though the Amazon Princess has never appeared on any Arrowverse show, she gets name-dropped a lot!

During last night’s episode of Batwoman, The Rabbit Hole, Kate Kane’s ex-lover, Sophie, confronted her on Gotham’s new ‘Batman.’ Because she’s seen this Dark Knight up close and personal in the pilot, she knows the man behind the mask is, well, a woman. And she suspects it’s Kate. So she asks her point blank if she’s the new Caped Crusader.

“No,” Kate responds. “If I wanted to dress up in a costume, it would be Wonder Woman.”

OK! So, once again we’re reminded Wonder Woman exists in the Arrowverse and this is far from the first time! If I’m counting correctly, there’s actually seven other times Princess Diana has been name-dropped, either directly or indirectly, in the Arrowverse as it exists now.

1. The Episode Helen Hunt from season three of Legends of Tomorrow dropped a major easter egg when Zari (who is actually The Mighty Isis) took a time-displaced Helen of Troy to what she called an “island full of warrior women” that exists in the same time period Helen is from: Themyscira!

2 In a 2016 episode of The Flash titled Welcome to Earth 2, Barry Allen had ‘Diana,’ among other familiar names, on speed dial.

3. In the Flash episode Infantino Street from season 3, Barry Allen passes by a jail cell while searching A.R.G.U.S. The name on the cell is Cheetah, Wonder Woman‘s sworn enemy.

This might be cheating a little bit but Smallville, a Superman continuity that has been made official Arrowverse canon, hinted at Wonder Woman multiple times! Not only that, Supergirl confirmed Smallville exists in the Arrowverse way back in 2017! During a flashback scene, a young Kara Danvers interacted with her cousin Clark’s computer nerd friend from Smallville, Chloe Sullivan!

4. In the season one episode Hourglass, during a vision of Lex Luthor’s future, there is a skeleton wearing large bracelets. Next to it, there is a metallic tiara.

5. Asylum, during Smallville’s third season, featured a newspaper headline that read THEMISCYRAN QUEEN ADDRESSES VATICAN, which refers to Wonder Woman’s mother, Queen Hippolyta, as well as the home of the Amazons, Themyscira. 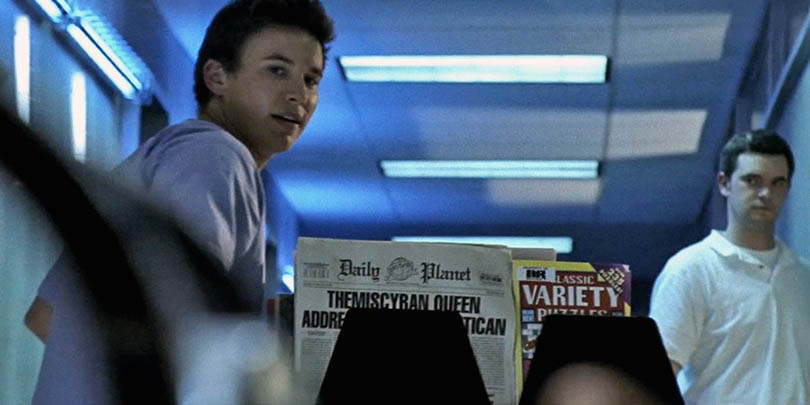 6. In the episode Warrior from season nine, Lois goes to a comic book convention wearing a costume similar to Wonder Woman’s. She says she’s an “Amazon princess.”

7. In the season ten episode Fortune, Chloe Sullivan mentions to Clark how she encountered other heroes while she was away, including “a wondrous woman who’s gonna throw you for a loop”.

8. So while it was pretty cool to hear Kate Kane, aka Batwoman, mention Wonder Woman, it certainly wasn’t surprising!

Have a Great Idea For a DC-related TV Show? DC Universe Wants to Hear From YOU!
What We Know About DC’s 5G Plan… So Far!
Comment