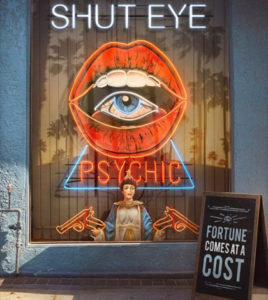 Back in the day when I was ‘courting’ my wife, we’d go to one of those roadside fortune tellers with the big hand sign. At the time, the future Ms. Geek Dog was totally rocking this gypsy vibe and  loved reading tarot cards so the occasional couples palm reading from Sister Rachel was one way I bonded with her (guys, you know what I mean!) The problem was I’ve always been a sceptic with all things spiritual so it was difficult not to smirk through the obvious cold readings.

So it was nostalgia that led me to Shut Eye, a HULU original series that centers around a failed magician and his wife who operate as fortune telling scam artists in California. Through a series of events they become involved with the Gypsy mafia, two competing Roma families that control all the psychic storefronts in Los Angeles, leading to the same predictable situations we became familiar with in HBO’s The Sopranos.

Jeffrey Donovan plays Charlie Haverford, a man whose psychic gifts may or may not be real. When his visions become all too vivid, he begins to regret taking advantage of his marks – suckers who fall for the couple’s fortune telling schtick.  His wife Linda (KaDee Strickland) fears their profits are at risk so she re-targets an abandoned rich mark with the help of her bi-lover (she has itches that need scratching according to Charlie.) What follows are the types of twists and turns, sex, murder and mayhem you’ve come to expect from streaming original programming.

Much of the series’ comic relief comes from the interactions between the two Gypsy families who are, nevertheless, just as deadly as their Italian counterparts in the Sopranos. Through their interactions, we get a glimpse into Gypsy traditions – though I’m not certain if the habits and rituals portrayed here are true or made up for this show. Most interesting is a story told by Gypsy “godfather” Fonso Marks (Angus Sampson) on why Gypsy’s have a God-given right to steal.  With the overbearing personality of a used car salesman, Fonso’s scenes are often a joy to watch as are those by his mother, Rita, played by the eternally beautiful Isabella Rossellini. When Charlie decides to rebel against his Roma overlords, we see how ruthless they can be.

If one season of Shut Eye was all we had, I’d feel like the 10 episode run was worth my time and I’d move on to the next show on my watchlist. But HULU has seen fit to renew it for another season. It may not be the most innovative show on TV, but I’m intrigued enough to visit this crazy Gypsy palm reading world for a few more hours.

Taking it’s cues from The Sopranos, Gypsy gives us an intimate yet fictionalized look at the Gypsy Mafia. Enough twists and turns and interesting characters make this series actually worth your valuable time.