Academy Award-winning actor could be commandeering the Black Pearl!

New artwork for Disney’s Pirates of the Caribbean shows Once Upon a Time… In Hollywood star Leonardo DiCaprio replacing Johnny Depp as Captain Jack Sparrow.

Mr. Depp lost in a libel case he fully expected to win in November and is now a wifebeater as far as UK law is concerned. This set off a chain of events that resulted in him being fired from his role in Fantastic Beasts and being blocked by Disney from even appearing in a cameo for their upcoming sixth installment of the Pirates franchise. But the storied media company realizes the character is vital to the movie even though the former actor in the role isn’t. It’s no wonder an actor of equal or greater talent may be circling the role of Jack Sparrow – Academy-award winner Leonardo DiCaprio! 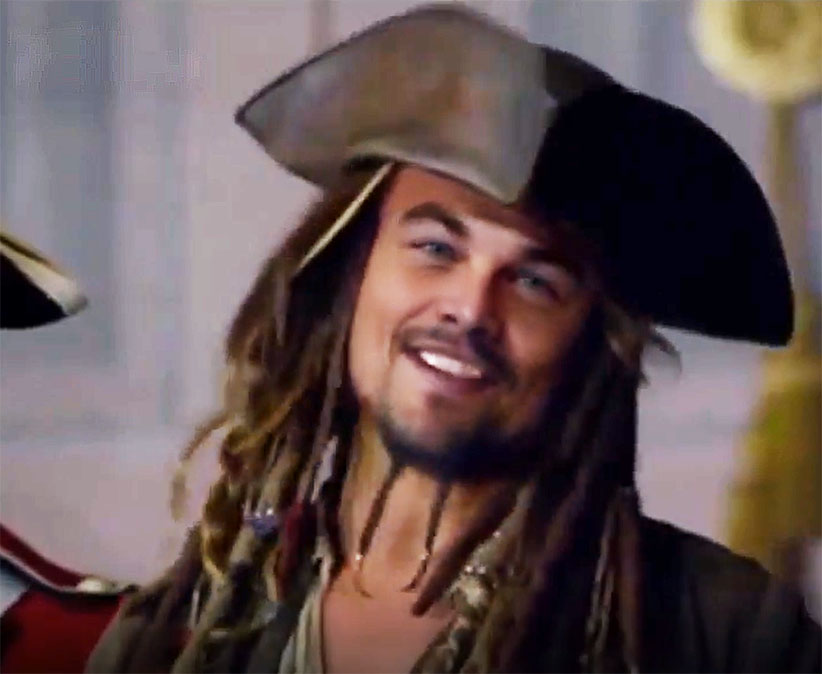 After all the controversy involving Johnny Depp in the last few years, many audiences have called for the former Pirates star to reaccess his career even as Warner Brothers have confirmed multiple times his ex-wife Amber Heard is still very much part of Aquaman II.

Depp and DiCaprio worked together in the 1990s on the movie What’s Eating Gilbert Grape and have been enemies ever since. Woman’s Day Magazine recently reported Depp became threatened by Leo’s talent. According to sources it only made matters worse when Leo was nominated for a Best Supporting Actor Oscar and Depp wasn’t even considered. And now that Depp’s legal battle against the British tabloid The Sun exposed he’d nicknamed DiCaprio “pumpkin-head”, their feud has escalated.

“As Leo became more famous, his rift was forgotten — but not from Johnny’s side, which made it really awkward for all their mutual friends.” The source concluded, “Leo’s reputation is much more powerful than Johnny’s now.”

Depp’s lawsuits against his Amber Heard also revealed paranoid delusions on Depp’s part with the fading former A-lister believing his ex-wife, Amber Heard, was having affairs with various men, including DeCaprio himself. It’s believed Depp’s jealousy rages fueled his abusive behavior against the Aquaman II actress.

Typically, people become paranoid about their partner cheating on them for three reasons, Susan Golicic, Ph. D., a certified relationship coach and co-founder of Uninhibited Wellness, told Bustle Magazine. Trust issues are one of them, for sure, but it may also mean you’re struggling with confidence or projecting.