Hook Up Culture From The Female Perspective 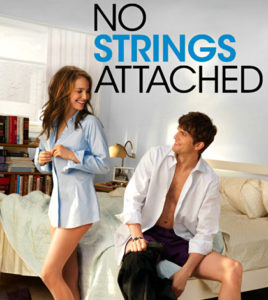 Actor Ashton Kutcher has made a point to promote No Strings Attached as empowering to female sexuality and, in a way, he has a point. In Hollywood and literary days gone by women who were seduced by pleasures of the flesh for their own sake (a fancy way of saying ‘casual sex’) were treated as whores and branded with a big scarlet letter. The men usually skipped town – on to their next sexual conquest – and the women were left scarred for life, destined to be seen as damaged goods. Lately, though, Hollywood has given a better deal to us jezebels. If we’re lucky we get the man in the end. Things don’t turn out quite as bad for us, especially if we believe getting married is a good fate. This is the route No Strings Attached takes. The message? Hooking up is great if it leads to a ‘healthy committed relationship.’ If it doesn’t, well then you just might miss out on the love of your life. The question, though, is how does that ultimately empower women and their sexuality? It certainly moves us to another level but we’re still viewed as a possession to be owned or rejected by the men we’re sleeping with.

This isn’t to say the movie isn’t enjoyable. As romantic comedies go it’s better than most and if it opens up new sexual horizons for the mostly young female audience it is attracting, then more power to it. Emma (Natalie Portman) and Adam (Kutcher) are lifelong friends who decide to hook up one morning. And seriously, why wouldn’t they? They’re both young and hot.  Nature designed us that way. We mate with the hotties because we want the excitement and strong children. We marry the stable ones because we want to be cared for. This is even covered in the movie. One of Emma’s doctor friends takes Adam aside and tells him he knows they’re having a sexual relationship. But once she’s done having fun with her boy toy she’ll turn to him because he’ll take care of her. But I digress. Anyway, to preserve their friendship, Emma and Adam agree to keep their sexual encounters going as long as it can be with ‘no strings attached.’ No jealousy. No commitments. No expectations. They can both see and do anyone else they want. But, of course, anytime two people take this road in the movies you can always expect a speed bump sooner or later in the form of the ‘L’ word. LOVE. Someone falls in love. Someone gets hurt.

In the case of this movie, gender roles are reversed. Adam falls for Emma, she pushes him away. After all, she’s an independent woman, don’t cha’ know? A resident in a big hospital who doesn’t have time for the frivolities of romance. A warm body with a stiff one waiting in her bed for her when she gets off from work is her main objective. So she pushes him aside when Adam wants more.

But then she misses him. And pines for him. And they eventually (no surprise) get back together. And fall in love. And I guess live happily ever after.

I’m sure Kutcher and Portman would have loved to have made a movie where two young friends have totally awesome sex without ever having to deal with the emotional baggage that often comes with a relationship. They are, after all, part of the hook-up generation as described by writer Tracy Clark: “Innumerable 20-somethings who’ve found that casual sex can be healthy and normal and lead to better adult relationships.” But society as a whole still feels icky about that. And in our political climate that seems to prefer abstinence over sex education, we’re stuck with a compromise – casual sex is good ONLY IF it leads to a monogamous relationship. If it doesn’t, we’re left emotionally damaged. But in the real world of young women today we know it isn’t that way at all. Some of us still yearn for Mr. Right, we yearn for him and we search for him, and we celebrate when we find him. But most of us will never pass up a night with Mr. Right Now – a warm body and stiff one waiting for us in our bed.

A funny and sexy movie that flips that table on typical rom coms and puts today’s women on a level playing field with men. If it reveals one truth, it’s this: Some of us still yearn for Mr. Right, we yearn for him and we search for him, and we celebrate when we find him. But most of us will never pass up a night with Mr. Right Now – a warm body and stiff one waiting for us in our bed.