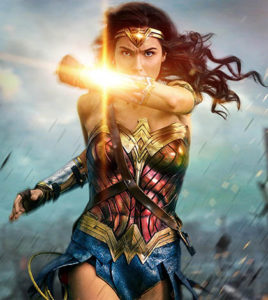 When I was a kid, MEGO action figures were my world. We called them ‘dolls’ then and I took quite a bit of teasing from my older brother about playing with dolls but these were special and if you’re a collector, you know what I mean. Like Barbies and Big Jims and G.I. Joes of the day, MEGO’s line were posable with real cloth costumes, not like the plastic molded crap we have today. Every few weeks or so my dad would take me down to Roses department store and buy me a new one – a pretty big deal considering my parents were never wealthy and had to be frugal with their money. I always leaned towards the DC heroes but was a little apprehensive about getting Wonder Woman. I didn’t think my dad would approve of me playing with a girl doll but he didn’t bat an eye when I finally held one up to him in that way kids do when they want their parents to buy them something they’re reasonably sure they won’t. He could be old school in a lot ways but had been mellowed by that point by my mom, a very stong woman who was probably more progressive on social issues in the 70s than most her age in the deep south. To them, their son playing with a Wonder Woman doll probably meant I appreciated strong women. Which I did. And which I do.

My mother was raised during the final years of the great depression. Family legend says her father, my grandfather, was murdered when she was 12, leaving her to be raised by her grieving and economically poor mother. Just as it is today, it’s difficult for a child to be reared by one parent, especially one who works long hours in a paper mill. Those children tend to grow up and become wordly a little faster and even though she was a decade older than the young people most affected by the 60s and all the social change that decade brought, I could tell in later years those events – the civil rights movement, the sexual revolution, the women’s rights movement- might have altered her world view a little. 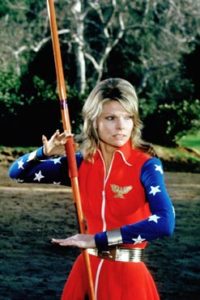 I have an early memory of a stormy night before my hometown had cable. My mother and I were watching the Cathy Lee Crosby made for TV movie Wonder Woman on a black and white TV. The reception was horrible but I stared at that screen intently, grateful for every shadowy image of the Amazon princess. A year later I was glued to our bigger color TV watching the Lynda Carter Wonder Woman series weekly. She, and Jamie Summers (the Bionic Woman) sort of symbolized girls to me at that time in my life. And even though 1978’s Superman: The Movie made me a lifelong Superman fan, Wonder Woman was still important. She was all my girl friends. She was my mother.

So, ladies, I have a secret to tell you. You probably already know this but if you’re dating or married to a geek guy, he see’s you as Wonder Woman. Far beyond wanting you to dress up in the costume for whatever glorious or bow chica bow wow reasons, real or imagined, he actually believes you are a strong, spirited and independent type of gal. Being the geek that he is, this is one way his respect for you manifests itself – as the greatest female superhero in the world. You’ve made a difference. You’ve saved him. I know this because I’m a geek guy. 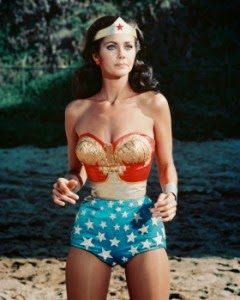 But Wonder Woman is far more than a nerd’s fantasy projected onto the woman in his life. She represents everything women have wanted for themselves and their daughters. The right to vote. Equal pay. Reproductive and sexual freedom. A future without war and injustice. Love. She’s the feminist icon that countless writers have described, wrapped up in shiny Americana. How can I accurately write about what this character means and has meant to, not only comic book fans, but women and girls? I really can’t because I’m a guy. Even my wife and daughter and female friends struggle to find the words after viewing this film. Her creators were intimately involved in the early 20th century feminist movement and it shows in much of the original source material. And even though DC comics watered down the character in decades to come, she was still the only woman in the entire universe of comics on equal footing with the guys. With so much social and political implications and so many hopes and dreams and inspirations and, yes, sexual fetishes riding on a cinematic vision of this character, is there any ‘wonder’ it took decades of trials, errors and misfires to not only bring her to the big screen but to also get her right?

So, you’re probably wondering what I actually think of the movie. Well, Wonder Woman is a triumph. We’ve seen that term attached to movies a million times but never has it been such an apt description. It’s a triumph for DC Comics and Warner Brothers who’s more recent superhero adventures have been misunderstood, panned and jilted in favor of cartoonish Marvel fare. It’s a triumph for geeks who spent many Saturday mornings with a bowl of fruit loops and the Superfriends. But, mostly, it’s a triumph for women everywhere – past, present and future.

You probably already know the basics. Princess Diana lives on a hidden island named Themyscira. Pilot Steve Trevor crashes there. Though the exact details differ in various incarnations of the story, Diana convinces her mother to let her return Trevor to his world so she can kill Ares, the God of War whom she’s convinced is the cause of all the world’s strife. It’s a grand origin story about an idealistic young woman who wants to change man’s world with a message of hope and love and once Princess Diana enters it, her naïveté becomes her strength. Wonder Woman is not constrained by what our society considers a woman’s place to be. She points out the folly of some of the things we do, from the clothing we wear, to marriage and sexuality, to how we wage war, in often laugh-out-loud style. But we get the point every time. 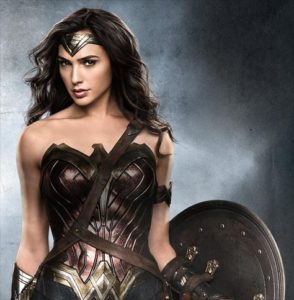 But this Amazon means business as we see in one the most inspirational scenes ever filmed for a superhero movie. Before we see her in full-on Wonder Woman glory, she is on the front line of WWI in a trench. People around her, soldiers and townsfolk, tell her there’s a town across the field and the people living there have been either killed or enslaved and the only thing preventing liberation are German soldiers on the other side. “No man can cross this,” a determined Steve Trevor warns her. “It’s no man’s land.” With that, she drops the hooded overcoat she’s been wearing and ascends a ladder onto the field, in slow motion, as Wonder Woman. It’s the first time we see he in her costume, and like that moment from 1978’s Superman when Chris Reeve spins though that door and takes flight to save Lois Lane from her crashed helicopter, the moment is thrilling. With her bracelets and shield she repels bullets and bombs. Drawing the German’s fire, the allies in the trench now behind her charge forward. The town is liberated.

A lot of critics are complaining about the final battle scene going on a little too long. This has become standard fare in superhero movies and, truthfully, it’s a needed conclusion in the ultimate good vs. evil nature of these films. I do find it curious that I’ve read very few complaints about this in other superhero movies. Maybe these critics have decided enough is enough? Or maybe seeing a woman carry out what has been traditionally a man’s role is a bit too much for them to bear?

The cast is damn near perfect. Gal Gadot, who caught a lot of flack from the fanboy community (some of it sinister, bordering on anti-semitism) when she was cast, gets the last laugh here. Like apparent miscasts in the past (Christopher Reeve is too skinny… Michael Keaton is too short), the geeks of the net howled at the prospect of the thin, browned eyed, relatively small breasted Jewish woman getting a role that only a big boobed blue-eyed American model could play. Forget the fact that the mythological Amazons come from a part of the world where blue eyes are not only rare but are considered a sign of weakness. All Gadot needed to do was project an aura of power and an attitude. And she nailed it.

And the Amazons? Great Hera!

Chris Pine? He plays Captain Kirk in every role he gets and was the perfect leading man for Wonder Woman’s fish-out-of-water persona.

I’ve seen it three times and I can barely contain my excitement for this film. 4.5 stars out of 5!

Biography: Gal Gadot is an Israeli actress, singer, martial artist, and model. She was born in Rosh Ha'ayin, Israel, to a Jewish family. Her parents are Irit, a teacher, and Michael, an engineer, who is a sixth-generation Israeli. She served in the IDF for two years, and won the Miss Israel title in 2004. Gal began modeling in the late 2000s, and made her ... See full bio >>
Born: April 30, 1985 in Rosh Ha'ayin, Israel