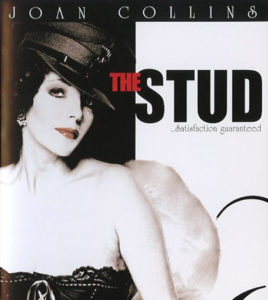 Joan Collins plays Joan Collins in everything she does, from Alexis Carrington from the 1980s night time soap Dynasty, to her run as queen bee Alexandra Spaulding on CBS’s defunct Guiding Light. In 1978, she was the original rich cougar in The Stud, based on her sister Jackie Collin’s novel of the same name. Collins plays Fontaine Khaled, the London wife of an older, wealthy but boring businessman. She spends his money on her night club and partying. She hires a very young manager to run her club, Tony, a player himself, but his real job is satisfying her sexual whims. At the end of the film she is divorced by her husband for cheating on him. Though the overall film is dated (the clothes, the music, etc.), it’s a pure trashterpiece and watching Collins use her boy toy is exhilarating.

What makes it hot: Collins was ‘cougar’ before cougar was cool.

Memorable scene: Several, including Collins’ sex scene with her young stud muffin in the elevator. She secretly videos it.

Memorable line: “Well… that was nice.”

Does she get away with it? No, her husband finds the video Fontaine made in the elevator and divorces her. 🙁

Incredibly dated, The Stud does have it’s moments. Joan Collins is in her prime.