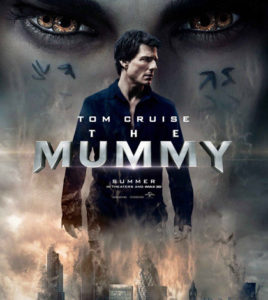 I’m already on shaky ground with the Film Critics Union for liking movies I’m not supposed to like, but what I’m about to write just might get me kicked out: I have ZERO problems with sequels, prequels and reboots as long as they’re done well. I don’t wring my hands over the oft-repeated meme that Hollywood has run out of new ideas.  The fact is, Hollywood has NEVER had any new ideas. Every so-call acclaimed film, every total bomb, and every movie in between borrowed from something else. So character and story continuations, known as “Universes” these days, are perfectly acceptable film-fare to me if, like I said, they’re done well. And that’s the key.

When Universal announced they were kicking off their Dark Universe featuring classic movie monsters like the Mummy, Dracula, Creature from the Black Lagoon, Wolfman and Frankenstein, I was thrilled! I grew up watching Friday Night Frights on WTCG Atlanta Channel 17, a double-feature Universal Studios horror movie night hosted by some redneck Vampire named Dead Earnest. It was there I first saw those classic monsters and I was excited to learn a few years back of Universal’s plan to update and tie them all together.

Although we’ve seen various Hollywood takes on that lot of characters, it wasn’t until 2014’s Dracula Untold that Universal’s plan came into play. But, oops! That movie didn’t do much for anyone so the studio decided it WASN’T going to be part of their Dark Universe plans. The honor of formally formally for real we really mean it this time launching the series would fall to Tom Cruise’s The Mummy. Unfortunately it’s an even bigger mess than the Dracula misfire from three years ago.

Where to begin? First and foremost, I didn’t come to this movie already jaded over sequels and reboots as some critics have. I had no preconceived prejudices. But after viewing it I’ll say this: it lacks the fun and adventurous elements of the Brendan Fraser trilogy from the late 90s. Now that doesn’t mean monster movies have to be fun or funny. But they should be something. This film can’t quite decide what it wants to be – a horror movie or Mission: Impossible 6 – Curse of the Mummy. What results is a confused 2+ hours that does neither very well.

Interestingly, it’s the core plot that stands out but too many franchise-building moments make the completed work feel like an extended trailer for upcoming movies. The Mummy was first played by Boris Karloff in 1932 and, to my knowledge, the character has always been male. In this iteration, it’s a woman, Princess Ahmanet (Sofia Boutella), whose backstory reveals daddy issues that ultimately made her evil. It’s a brilliant twist in an otherwise sub-par treasure hunter/soldier of fortune story-line. And it’s unfortunate the rest of the story crumbles around it. We probably won’t see Universal take such a progressive approach in their upcoming Dark Universe entries again.

And, yes, it’s doubtful the Mummy’s box-office failure will derail plans for upcoming monster movies in the Dark Universe series. Bill Condon, whose previous film “Beauty and the Beast” grossed $1.24 billion globally, will make Bride of Frankenstein for 2019.  Johnny Depp and Javier Bardem will star as the Invisible Man and Frankenstein’s monster in future films. And, of course, the studio will try to bring Dracula and the Wolfman back to the big screen.

So there’s plenty of opportunity to turn the Dark Universe around, just as DC/Warners’ Wonder Woman has made many of us forget the darker, clunkier films in that extended universe.

While there’s usually something redeemable in every movie, it’s hard to find here.