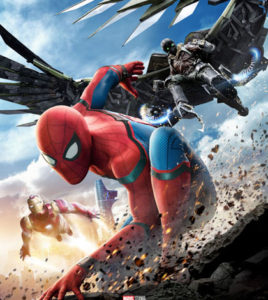 You’ve seen this movie before. 20 times or so, if I’m counting correctly. That’s the number of Marvel Cinematic Universe movies plus five previous Spidey flicks. Marvel has a formula that has served them well and made them gobs of cash. Here it is: Bright colors, snappy CGI action and a wise-cracking hero that takes a familiar rise, fall and rise again path to eventual victory over the bad guy. You can replace the main character with  any other from Marvel’s stable without slowing the pace of each movie. With very few exceptions, they’re that interchangeable. It became pretty apparent with Ant Man, but Dr. Strange, a character who was always serious in the comics, solidified that point when he was given the Tony Stark snark treatment.

But going into Spider-Man: Homecoming, it occurred to me the sophomoric humor present in most of the MCU films would finally seem appropriate with an actual sophomore. High school boys can be such sarcastic shits. Surprisingly, though, Tom Holland’s Peter Parker played the role as an earnest and awkward teenager. Snark was kept to a minimum, and his was easily the best performance of the movie even though his voice was a bit shrill like the pre-pubescent Peter Brady. What really weighed the movie down was the first half. It was literally a solid hour of slapstick comedy and gags. Some worked. Most didn’t. Robert Downey Jr.’s schtick is just tired. He just mailed in his role and the movie would have simply been better without him.

Sony/Columbia/Marvel thankfully spared us from seeing Parker bitten by a radioactive spider for the third time in two decades. Instead, Homecoming picks up shortly after the events of Captain America: Civil War. Spidey is trying to balance high school life – including a crush on a throwaway character (Laura Harrier, “Liz”) whose identity is pretty obvious from the start – and being a neighborhood superhero. Under the guise of interning at Stark Industries, he is actually being slowly cultivated by Stark for an eventual role in the Avengers.

Meanwhile, the cleanup and rebuilding of New York, after the throwdown we saw in Avengers: Age of Ultron, takes a sinister turn when the Men in Black show up (led by Tyne Daly in one the year’s coolest cameos) to give the salvage crew working ground zero the boot. Apparently, it suddenly occurred to the federal government that maybe that alien technology needs to be on lockdown. The owner of the ousted salvage crew just happens to be Adrian Toomes, played as Michael Keaton by Michael Keaton. His crew later realizes some of that alien tech was recovered the day before and now sits in their warehouse. It has some pretty cool powers. Using it, Toomes becomes the classic villain from Spider-Man‘s rogues gallery, The Vulture. The spare parts laying around also introduce us to another comic book baddie, The Shocker.

What results is classic superhero stuff. Spider-Man tangles with the Vulture a few times before finally taking him down. There are no surprises here.

What I found the most appealing about the movie was its shout outs to a couple of classic John Hughes 80s movies (the high school’s homecoming dance has an 80s theme.) The teen cast almost mirrors that of the Breakfast Club, with Holland as the perfect stand-in for Anthony Michael Hall. Harrier is the Molly Ringwald-type. Tony Revolori is a terribly cast Flash Thompson. As the Emilio Estevez of the group, he simply isn’t intimidating at all. Thompson, in every other Spider-Man treatment, is a Biff Tanner-esque bully. Here, he’s just an overbearing annoyance who likes to call Peter ‘Penis.’

Rounding out the Spider Breakfast Club is Disney actress and pop singer Zendaya. As Michelle, She’s the Ally Sheedy of the group, a social outcast and political activist wannabe.  We don’t realize the importance of her role until close to the end but the big reveal is not handled well. The ‘M” in “MJ” does not stand for Michelle, it stands for Mary, as in Mary Jane, Peter’s classic love interest. Because of the name change, I’m not sure anyone in the theater had the ‘aha’ moment the film’s producers were hoping for.  But I have to give props to the casting agents for this movie. It has a lot of diversity. Not only is Zendaya African-American, but so is Peter Parker’s love interest, Liz. Tony Revolori (Flash) is of Guatemalan descent.

The other connection to an 80’s movie is a scene where Spider-Man is trying to catch up to a couple of baddies. The route he takes is reminiscent of the final scene of Ferris Bueller’s Day Off. Unfortunately most of this will probably go right over the heads of the age group the movie is trying most to appeal to.

In the audience during my viewing, there were a few people that laughed at everything. They were clearly trying to like Spider-Man: Homecoming, essentially saying “hey! This another funny Marvel Movie! YAY!” But had to realize most of the humor was falling flat.

Spider-Man: Homecoming’s debut weekend last week was a cause for celebration for Marvel with its $117 million domestic gross and good reviews. But it tumbled 73.2 percent in its second week, one of the worst Friday-to-Friday drops the Marvel Cinematic Universe has ever experienced.  I’m not sure if that means others, like myself, find the Marvel formula wearing thin, they just weren’t ready for another Spider-Man reboot, or the movie just isn’t as good as some of the glowing reviews would indicate. But when you see the glow of dozens of phones lighting up before a movie has reached it’s climax, you know people are about ready to go home.

Spider-Man: Homecoming is a fun, popcorn movie perfect for kids and teens. The sophomoric humor present in all Marvel movies starts to wear thin here.