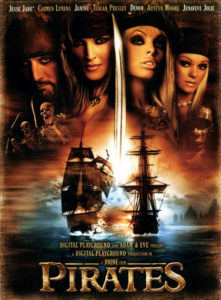 Avast, me hearties and lusty wenches!

Adult versions of popular TV shows and movies are hits and misses at best. Because they obviously can’t match the production values of the original mainstream hit, they often sink into a sad realm of cheap parody and can’t be saved by even the hottest of sex scenes. I recall watching two such flicks when I was in middle school and both were knock-offs of Flashdance. Imagine the disappointment when, after having recently discovered the 80s classic on VH1, I was subjected to the absolutely horrible Flesh Dance and Flash Pants!

Pirates raises the bar on mainstream movie pornification, though. Billed as being the most expensive adult movie in history, it’s also the biggest selling and it recreates, sometimes very successfully, the swashbuckling action and romanticism of Pirates of the Carribean against lavish on-location shots and unusually good special effects for it’s genre. Tommy Gunn plays Victor Stagnetti, the Jack Sparrow-like Captain of a pirate ship who is being pursued by the dashing yet hapless Captain Edward Reynolds (Evan Stone), a soon-to-be famous pirate hunter. Both of these male leads are played a little over the top, unfortunately, and represent the only major farcical elements of the movie. You’ll forgive this, however, because they’re both hot – especially Stone – who is nicely hung and absolutely gorgeous. Other male characters are equally cute but dumb, as the film reserves the machismo roles for it’s two female leads – Jesse Jane and Janine Lindemulder. GIRL POWER!!!!

History is replete with women pirates, often as cutthroat as their male counterparts. One of the more famous ones was Anne Bonny. Born in Ireland in 1697, Anne married a pirate and had affairs with  pirates. When one of her affairs was discovered she was sentenced to flogging, but she skipped town dressed as a man. Anne joined her lover’s – Captain Calico Jack’s – crew and became a pirate in the Caribbean. Anne had a reputation among her peers of having a fierce and courageous temper, an insatiable libido and a fiery disposition. But woe to anyone who tried to take advantage of her. She once thrashed a young man with a whip for trying to sexually assault her, and injured him badly enough that he had to take to his bed for several weeks!

Taking their cues from the current trend in Hollywood, Jane’s and Lindemulder’s characters are not ‘damsels in distress.’ They don’t need saving. Kicking the strong independent streak of Kiara Knightly’s character in “Carribean” up a notch, they’re kick-ass chicks in the current tradition of strong women in action movies who ultimately save the day. Jane is Captain Reynold’s pouty first office, known for her sexual prowess. Lindemulder occupies the same position for Captain Stagnetti and has the reputation for being a cruel and heartless hellion.

It’s 1763 and Captain Edward Reynolds is hunting pirates for some unnamed royal Monarch. He has little confidence in his nautical command abilities and is considered something of a joke by his crew. His first officer Jules (Jesse Jane) believes in him, though, and spends a fair amount of time covering for him (when she’s not sampling the other men on board.) They happen upon a young woman named Isabella floating on some driftwood (she was pushed off another ship in an earlier scene) and she tells them that her husband’s ship was destroyed by the dastardly Captain Stagnetti. This leads the gallant crew on a quest to find Stagnetti before he unlocks a powerful secret on a remote Carribean island. Yep, the movie has a plot. And hot fucking, too!

Billed as being the most expensive adult movie in history, it’s also the biggest selling and it recreates, sometimes very successfully, the swashbuckling action and romanticism of Pirates of the Caribbean against lavish on-location shots and unusually good special effects for it’s genre.

Hey @Neilyoung #NeilYoung - I'm with you and will be finding a new music streaming service. #spotify needs to grow a pair. https://www.hollywoodreporter.com/news/music-news/spotify-neil-young-joe-rogan-1235081916/