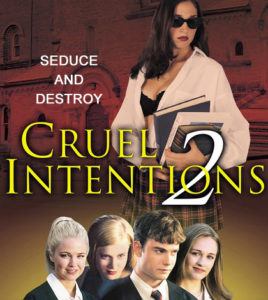 Sloppy writing and marginal acting only add to the trashy charm of Cruel Intentions II. Starring a young pre-Man of Steel Lois Lane Amy Adams, It was originally written as a TV series version of 1999’s deliciously evil original but FOX Television canceled it because conservative religious whiners complained about  ‘obscenities’ before the first episode ever aired. The producers quickly re-edited the first three episodes of what was to be called Manchester Prep, added a few juicier scenes, and released it straight to DVD as a prequel to the first movie. The players aren’t as beautiful but Cruel Intentions II nevertheless has a certain charm that rises above its overall mediocrity. Unburdened by the star-power of Sarah Michelle Geller and Ryan Phillipe who would have never gone for some of CI II’s racier material, the writers were free to push the boundaries of the mean girl theme.

Kathyrn Merteuil rules her private school via a secret society that decides who is popular and who is not. She uses raw sexuality and blackmails school officials to have her way. Sebastian Valmont, just as in the original, is her foil. The ‘cruel’ twist at the end was very surprising and certainly hot. If you enjoy youth-driven night time soaps like Gossip Girl, One Tree Hill, and 90210, you’ll definitely revel in Cruel Intentions II and mourn the weekly TV show that might have been.

What makes it hot: Kathryn is the conniving little bitch we love to hate… or hate to love. She’s pure evil, and we like seeing her win.

Memorable scene: Kathryn sitting on a male teacher’s desk who she’s blackmailing and pushing his head towards her spread thighs after she’s convinced him to bend some academic rules for her.

Memorable line: From the scene above. When the teacher says, “I worship you Kathryn,” she responds,”Worship works best on your knees… please be quiet… I’m trying to imagine I’m with someone attractive.”

Does she get away with it? Yes, Kathryn’s downfall doesn’t happen until the events of the first Cruel Intentions movie. But don’t worry. Kathryn’s sexy evil cousin Cassidy Merteuil shows up in part 3.