Film's Producer Says An Aquaman Sequel Without Amber Heard Was Never, Ever an Option

“Abject failure” is the only way to describe the Astroturf campaign by johnny depp fans to have Amber Heard fired from the sequel to Warner Brothers $billion+ sequel to Aquaman. Despite calls from industry insiders and writers to temper their claims to the contrary, alt-right geek sites and YouTube channels churned out new rumors weekly for the better part of two years about Amber Heard’s status in Aquaman and the Lost Kingdom, red meat for the Depp fans desperate to have Ms. Heard meet the fate depp has obsessed over since 2013: “She’s begging for global humiliation and she’s going to get it.”

So far, though, his and his fan’s lies and insinuations have come up empty as Deadline reported last night Amber Heard’s role as Mera has never, ever been in doubt:

[Yesterday] on the Deadline Hero Nation podcast, Aquaman and the Lost Kingdom producer Peter Safran was asked whether the social media campaign by Johnny Depp fans for Amber Heard’s removal from the DC sequel ever had any influence on the production and their casting decisions.

“You gotta do what’s best for the movie,” continued Safran, “We felt that if it’s James Wan, and Jason Momoa, it should be Amber Heard. That’s really what it was.”

“One is not unaware of what is going on in the Twitter-verse, but that doesn’t mean you have to react to it or take it as gospel or accede to their wishes,” said Safran, “You have to do what’s right for the film, and that’s really where we landed on it.” 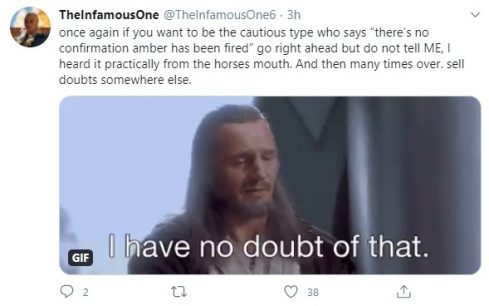 “Repeat a lie often enough and it becomes the truth”, is a law of propaganda often attributed to the Nazi Joseph Goebbels. It doesn’t mean it’s actually the truth. It just means enough people have bought into it so that their minds are not easily changed. The definition of ‘truth’ becomes something they want to be true or something that possibly could be true. This is known as the illusion of truth effect among psychologists. During the presidential administration of Donald Trump, the national lexicon was introduced to such words and phrases as alternative facts and fake news to explain away things that defied all known facts but were, nevertheless, passionately believed by a wide swath of his supporters.

Another related term is confirmation bias, the tendency of people to favor information that confirms their existing beliefs or hypotheses.

All of these often combine to create political and social separations that are difficult to reconcile, even when one side is presented evidence and facts that disprove their assertions. Often simply pointing out that a claim is unsourced and rumor quells the disagreement although sometimes people dig in their heels and exclaim “well, you can’t prove it ISN’T true!” 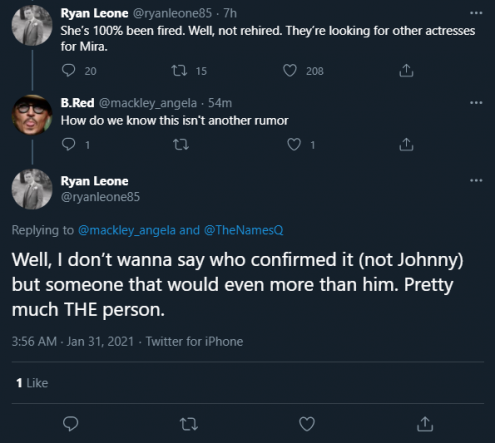 Such is the case with Amber Heard, an actress who’s been made much more famous than her body of work would suggest by just such a campaign of misinformation designed to ruin her career, carried out by a few, and bought into by many. The cast of characters in this Hollywood drama include hangers on pretending to be Hollywood insiders, a convicted drug dealer who worked for a notorious Mexican drug cartel, click-baiting geek sites, and a Vladimir Putin-connected attorney who took embargoed legal evidence, selectively altered it, and leaked it to tabloids.

So many scurrilous, untrue,  shit-for-brains lies have been fabricated and spread regarding Amber Heard that they’ve become hard to track. They range from claims she’s been fired from Aquaman II for reasons that change weekly, blacklisted in Hollywood, uninsurable, fired for drug uses, fired for weight gain, has had her role limited, and is being investigated by the FBI and the LAPD. Perhaps more ominously is the claim made by Ryan Leone, the aforementioned felon, who claimed Ms. Heard drugged and raped a female model before he suddenly vanished from twitter amidst theories he was in another round of rehab or perhaps serving more time in prison.

How did the drumbeat against Ms. Heard, begun as whispers in the bowels of reddit’s men’s rights groups as an example of feminist privilege and perceived #MeToo run amok, grow into such a massive AstroTurf campaign? Catch up on the some of the history here, then take a look at a small sampling of tweets, videos, and website propoganda following: