It's time for Christopher Reeve Purists to Move On. 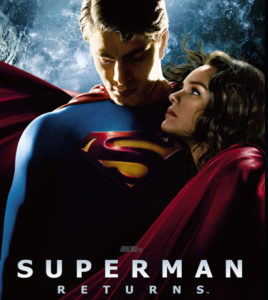 Superman Returns is a textured character study of Superman and Lois Lane’s tortured and star-crossed love story. I don’t know if the producers were going for The Note Book of Super hero movies, but it wouldn’t have taken much for the film to venture into that territory. At the same time, it was action-packed (well, maybe ‘packed’ is too strong of a word), beautifully filmed and featured a lush soundtrack that, in my opinion, improved upon John William’s original masterpiece.

This modern take on the characters – the strong female lead with issues many women can identify with, the sensitive hero who has major issues of his own – make this a great romantic film that was misunderstood by many.

I wrote this review on 3 hours of sleep the morning after a midnight viewing. Though Superman Returns is getting mostly positive reviews (it’s ‘Certified Fresh’ by Rotten Tomatoes), I don’t believe most critics gave it it’s due. So I’d like to address some of the criticisms in the context of my review of the movie.

I firmly believe that the most of the negativity directed at this film stems from a nostalgic fondness for Christopher Reeve and the 1978 classic, Superman The Movie. Now, there has never been a bigger fan of Reeve and his first portrayal of the character as I am but, as some may remember, even that movie received a fair share of bad press in 1978. They said Reeve was too skinny. They said the flying scenes looked fake. They said reversing the earth’s rotation to turn back time was silly. They said the movie tanked after the first hour. I didn’t agree with any of it, but critics will be critics and fans can be quite possessive of what they see as “theirs.”

After all, my dad never liked Chris Reeve. He grew up watching George Reeves and thought the 1978 movie was long, dull, and overblown. Now, almost 30 years later, its easy to forget the film’s low points because what worked, worked so well. Such is the same with Superman Returns.

So here is where I differ with the negative press:

Kevin Spacey – Despite reviews to the contrary, I believe Spacey’s Luthor had the most to work with but did the least with it. I’d read that he didn’t try to model his character after Gene Hackman’s portrayal, but IMO, he wasn’t even as good in the role as Michael Rosenbaum from “Smallville.” I’m not saying his portrayal was bad, but I just expected more from Kevin Spacey. When I saw Superman, I didn’t miss Chris Reeve. When I saw Lois, I didn’t miss Margot Kidder. When I saw Spacey, I did miss Hackman.

Kate Bosworth – Again, I’m going to disagree with most critics. I think she gave a solid performance. I mean, what were we expecting from Lois Lane? Did we think she would swoon for Superman the second she saw him? Did we hope she’d become an emotional wreck in Superman’s absence? Lois Lane, since the 60s, has always been a strong, modern, independent woman. Of course she has moved on. Of course she’s going to treat Superman with cool, even cold, indifference. Of course she hasn’t waited for him. And isn’t that why Superman loves her so?

Interesting that some critics are, well, critical of her performance because she isn’t enough like Margot Kidder. Yet they are critical of new Superman Brandon Routh because (they say) he is too much like Christopher Reeve… but he isn’t. Not really.

Brandon Routh – Routh is Superman. Period. But a modern Superman. An emotional one. He feels pain – both physical and emotional. He does what WE do when we’ve lost the love of our life. He broods. He schemes. He flies by her house hoping to catch a glimpse. He does good deeds, not only because he feels compelled to, but because he wants to be accepted. He hasn’t forgotten that his Kryptonian mother told his father that he would be odd and different. An outcast.

And he gets his ass kicked. Oh yes he does. If you’ve ever thought the overgrown boyscout needed a good ass kicking, you’ll be happy. I don’t believe you’ve ever seen a superhero taken down like this before. Watching him being kicked to the ground, powerless, and dragged across the rocks with his arms flailing was shocking.

I honestly don’t believe Routh borrowed much from Reeve in his portrayal of Superman. Even as Clark, Routh is a little less nerdy. He’s more like the kind of guy no one ever notices, as opposed to the bumbling and clumsy oaf.

The kid – Honestly, he works in this movie. But I don’t want to see a sequel that shows a kid coming of age with super powers. I see that every week in “Smallville.”  The kid is a compelling back story, though, and the moment we fully realize who he is one highlight in the film. I’m anxious to see how the producers handle him in the sequel.

Ah, another bone of contention with a few critics. Some have said the movie has a weak plot. But it isn’t any weaker or stronger than the 1978 classic. Luthor still has a passion for real estate, and has hatched a diabolical plot to create a continent. Here, the movie borrows from a relatively new piece of Superman lore – the eradicator – a device created to preserve Kryptonian heritage. Essentially, if the eradicator is deployed, it will destroy everything in its path en route to creating a “new” Krypton.

You will believe a man can fly. No, really, you will.

The airplane rescue scene is breathtaking.

The CGI is almost perfect.

Superman’s hair blows in the wind.

All in all, a quite satisfying summer movie.

Superman reveals his human side in this female-friendly entry into the Superman film series.

Hey @Neilyoung #NeilYoung - I'm with you and will be finding a new music streaming service. #spotify needs to grow a pair. https://www.hollywoodreporter.com/news/music-news/spotify-neil-young-joe-rogan-1235081916/