And just like that, Stars Wars is fun again! 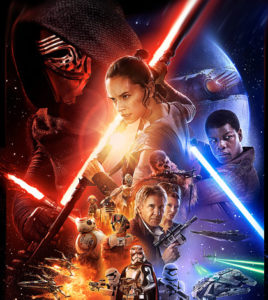 Some of you younger people won’t remember this but there was a time before the Internet existed where information about the latest movies wasn’t readily available. Aside from occasional newspaper and TV coverage, people were clueless about the latest casting and plot news of upcoming movies.

In the summer of 1977, I was 8 years old and had never heard of Star Wars. When my brother struck a deal with my parents to take me to that new release in exchange for a ride and ticket money, I wasn’t exactly thrilled. It sounded suspiciously like Star Trek, that boring show my brothers and their friends watched every afternoon and sitting through two hours of THAT didn’t sound like a fun times.

But I went. And you’re probably thinking I’m going to say something like ‘I was hooked from the opening riffs of the theme song’ but I wasn’t. In fact, I missed the first 20 minutes of it for a bathroom trip that evolved into a little exploration of the theater projection room. By the time I made it back into the theater, the Imperial Star Destroyer had already overtaken the Alderaan ship and Darth Vader was interrogating Princess Leia.

By the time I settled down, I’m sure the movie was half over. But the second half! Now that made an impression! X-wing fighters became the ship du jour of every 3rd grader to draw on their notebooks and broomsticks became light sabres (or life safers, as we called them.)

Star Wars ushered in a very magical time for movies that would last for at least seven years. Not only were there some very enjoyable knock-offs of Star Wars, but the following years saw the releases of the Superman franchise, new Star Trek films, ET, Back to the Future, Ghost Busters, Gremlins, Goonies, and, of course, the two Star Wars sequels. Every middle-aged geek alive today can trace their affliction back to the years 1977-1984.

Three years later I stood in line for several hours with two childhood friends to see Empire Strikes Back, the darkest of the original trilogy. Three years later, I stood in line again with with a couple of guys I was playing in a band with for Return of the Jedi. Side note – girls forgive geekiness if said geeks are also musicians. We had a couple of them make a run to Krystal for us. I think they even bought. 🙂

At that time I became thoroughly hooked on what are affectionately called genre movies – science fiction, horror, fantasy. I even grew to love Star Trek which, I will always contend, is the superior space opera franchise.

That latter point was demonstrated in the 1990s when the Star Wars prequel movies were released. Pieces of crap, all of them. Even the worst Trek movies were better than that bile!

And when JJ Abrams successfully revived the Trek franchise in 2009, it was further proof. Trek was fun again. Wars was a bloated merchandise and toy whore. But who would have thought the same genius director would take the reigns of Wars? Wasn’t that too much geek power for one man??

Ok, here’s where my actual review of The Force Awakens begins. To kick it off, let me make one more movie franchise comparison. When word broke early (see kids? The Internet! ) that the same muscle behind the 2000’s Batman trilogy would be producing Man of Steel, geeks danced in the street. But what we eventually got was an ok but clunky film. The Force Awakens is a bit like that. Abrams has created a good but rather clunky film that is NOT as good as his 2009 Trek movie. But never fear, it’s light years better than the 90s Wars prequels, better than Return of the Jedi, and (gasp!) BETTER than the 1977 original which, admit it, hasn’t aged well.

And it’s better than Empire Strikes Back. I know! Blasphemy! But other than a few too convenient plot points (JUST like 2009’s Trek) and some lines that were a bit hokey, The Force Awakens just kicks major butt. Did you catch that? Abram’s The Force Awakens is easily the best of the seven Star wars movies.

For my friends who have a political mind, this flick is pro-feminist and gives women – young and old – a reason to cheer. It would have been so easy and safe for the producers to make this movie a testosterone-filled action flick but they thought better. Leia is now the epitome of the strong matriarch, battle-weary but still fighting for her cause and her family. Newcomer Rey is the new Katness Everdeen.

Harrison Ford plays elderly Han Solo a bit too much like Henry Fonda in On Golden Pond. I can’t reveal anything about Luke Skywalker. Nada.

Even a comment on the major baddie of the flick would give a way a major plot point so I’ll refrain. Let’s just say the villain is very powerful (but sloppy) and has a connection to a major character.

All isn’t perfect, though. Some critics contend this is a just a remake of A New Hope and they have  point, though if I say too much more about that I’ll give away the entire film.

I want to spoil this for you, I really do. But I won’t. Just prepare yourself to be alternately thrilled and sad.

Star Wars: The Force Awakens feels like a 30 year class reunion where you actually want to see your old friends.